Embryonic stem (ES) cells and induced pluripotent stem (iPS) cells show the characteristics of self-renewal and pluripotency. In our Lab, functional cells, such as hematopoietic cells, immune cells, hepatic cells, and renal cells, are efficiently differentiated from the stem cells. Our objectives are to establish the novel system of drug screening by using the differentiated cells.

3. Overview of our research

Stem cells, such as embryonic stem (ES) cells and induced pluripotent stem (iPS) cells, show the characteristics of self-renewal and pluripotency. They are expected to apply for the regenerative medicine and the drug development. To do this, stem cells could be efficiently differentiated into functional cells. In our laboratory, functional cells, such as hematopoietic cells, immune cells, and vascular endothelial cells, are efficiently differentiated from stem cells. Our objectives are to use these differentiated cells for the development of novel systems of drug safety test, drug screening systems, and in vitro disease models.

Drug allergy is an important side effect in developing new medicines. Mast cells play a critical role in the allergy responses. However, mast cells are difficult to collect from the body, because they reside in the peripheral tissues but not in the circulation. So, we derive mast cell-like cells from human iPS cells and apply them for development of a novel system of drug allergy test.

The blood brain barrier (BBB) is a bottleneck in development of the central nervous system drugs. BBB is formed by brain vascular endothelial cells and excludes drugs from the brain. In vitro BBB model can help us for the evaluation of drug disposition in the brain. Our interest is that brain vascular endothelial cells are differentiated from iPS cells to construct the in vitro BBB model. Using this model, safety and availability of the central nervous system drugs will be monitored to accelerate drug development. 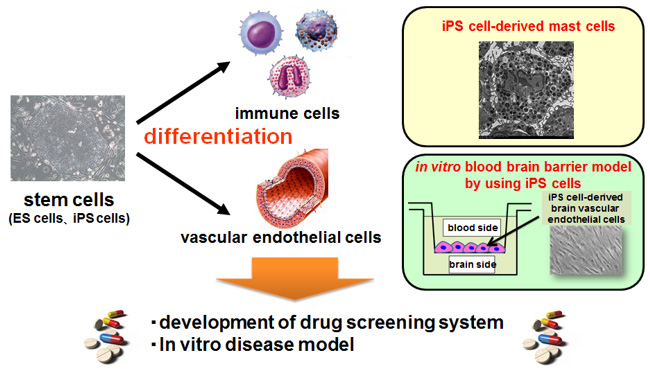